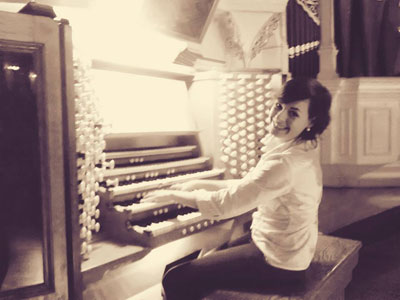 Classical composer and organist, Laurence Jobidon was raised near Quebec City, where she pursued musical studies at the Quebec Conservatory of Music in piano (under Suzanne Beaubien-Lowe), and then in organ (under Danny Belisle). It is also at this institution that she made her debut in composition, as Yannick Plamondon’s pupil, and that she won the Conservatory Teachers Award, given to the most promising graduate student. As an organist, she competed in various competitions and notably won first places in the Canadian Music Competition in 2007 and 2013, in Rivière-du-Loup Festival in 2011 and was a finalist in the Claude-Lavoie Organ Competition in 2014. She also played at various events across the province. Since 2014, Laurence Jobidon has returned to musical composing, this time as a pupil of the renowned Canadian composer Andrew MacDonald (1995 Juno Award winner for his “Violin Concerto”). She has written pieces for a variety of musical ensembles, especially for solo organ (Fantasy on “À la Claire Fontaine”) for flute and piano (“Odysseus” Suite) for string quartet (The Gypsy String Quartet) and for solo piano (Nanokosmos: the Octatonic Drift of a Mechanical World).