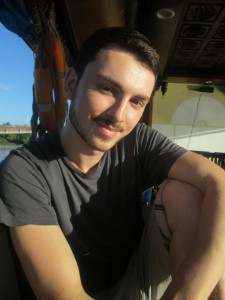 Leon Haxby is a 23-year-old composer from Wanstead, London. He began composition lessons with Darren Bloom at Forest School. Leon was awarded a scholarship at Birmingham Conservatoire, where he completed an undergraduate degree in Composition in 2015 with Second Class Honours: First Division. Leon has taken lessons from Richard Causton, Edwin Roxburgh, Ed Bennett, Joe Cutler and Howard Skempton. He has also taken masterclasses from Mario Garuti, Colin Matthews and Richard Ayres. In third year, Leon won the Birmingham Conservatoire Orchestral Composition Prize. His scores are held in the Royal Academy of Music and American Viola Society libraries, and his pieces have been performed in various locations throughout Europe, the USA and South Africa.

In addition to classical composition, Leon has also completed a number of scores for short films, and composed the soundtrack for Marianna Jungman’s show at London Fashion Week in 2014. Other collaborators include Jeff Leyshon, Andrew Delaney, Zena Holloway and New York-based photographer Graeme Montgomery. Leon has been commissioned to write soundtracks for Japanese Vogue, Nowness.com and Cent Magazine.

Leon has played bassoon since 8 years old, and achieved Distinction in a Grade 8 ARBSM exam in 2010. He has taken lessons from Adam Mackenzie (New London Chamber Ensemble) and John Orford (London Sinfonietta). Leon was also a member of Essex Youth Orchestra for four years. He has written new repertoire for the instrument, including a number of Concert Studies and also a Bassoon Quartet, and is currently working on some new arrangements.