When a close friend of Modest Mussorgsky, artist and architect Victor Hartmann, died suddenly from heart failure, it was a great shock not only for Mussorgsky but for the whole intellectual circle of St. Petersburg at that time.

A year later, in 1874, the friends of Hartmann organized an exhibition of his paintings, architectural projects, and various artifacts. The exhibition inspired Mussorgsky to compose a cycle for piano consisting of ten pieces and four intermezzi. Titled “Promenades,” they suggested strolling from one painting to another. Thus “Pictures at an Exhibition” became one of the most popular and difficult pieces in the piano repertoire.

During the twentieth century, it became even more popular due to the orchestral transcription of the piece by Maurice Ravel (commissioned by the great Russian-American conductor Serge Koussevitzky). With all the revolutions and wars which have tormented Russia since this memorable exhibition, most of the works by Hartman disappeared and practically existed only in their “musical” form. When I decided to present to the public the string orchestra version of “Pictures at an Exhibition” at one of the concerts of I Musici de Montréal, I asked my daughter Natasha (who is not only a violinist and a member of I Musici de Montreal but is as well an accomplished and very original artist with many highly successful international exhibitions to her credit) to try to recreate those lost images taking an inspiration from the music which was inspired in its turn by those lost images. As a result, fifteen magnificent paintings were created, thus completing a full creative circle.

The paintings were exhibited in the foyer of the concert hall and the success of this concert-exhibition led to the idea of bringing the show on the road.

Since Natasha’s original paintings were too big for transporting, the idea of projecting them on a screen came to mind. Once the magical word “projection” started to circulate, the next logical step was to make these paintings move on the screen, or rather “dance”.

Thus the idea of “Choreographed Paintings” was born. A sort of “script” was created to connect practically every turn of musical phrase, harmony, tempo or rhythm with a certain movement on the screen of the elements of the paintings. With the help of digital artist Gaël Hollard, the animation of the artistic material derived from Natasha’s canvases would tell not a “story” in the usual sense but rather a visual “commentary” or “translation” of the musical content.

Music and painting are the two art forms which are at the same time the closest to each other and the most different. They “happen” in two dimensions: while music exists and can be measured in time (meaning that it starts at a certain moment, develops and finishes some time later), it doesn’t exist in space – one cannot “touch” it. Painting, on the contrary, exists in space (on canvas for example; one can touch and measure it in square inches) but it doesn’t develop or change once it’s done.

This probably explains why these two great forms of art are longing for each other. It influences even musicians’ and painters’ vocabularies: while musicians are always looking for the “colors”, “lines” or “architecture” of the musical work, painters are trying to create the “rhythm”, “harmony” or even a “melody” and “polyphony” in their visual works.

With our “Choreographed Paintings” we succeeded, it seems, in creating a symbiosis of the two. The painting “lives” and develops there in time and the music gets a “body” and becomes “visible.” It is rather like solving the problem of Harry Potter’s Voldemort (you know who…) – without the evil intentions of course…

So, welcome to our Paintings for the ears and Music for the eyes! 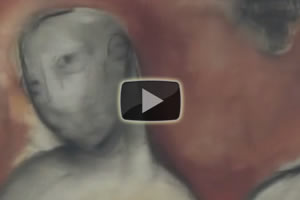 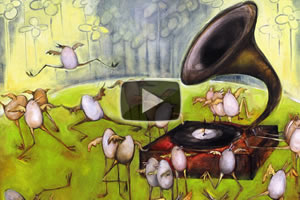 Ballet of the Unhatched Chicks 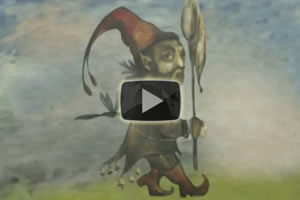 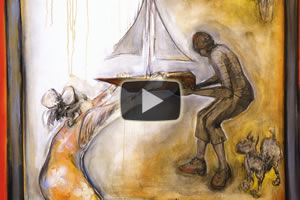