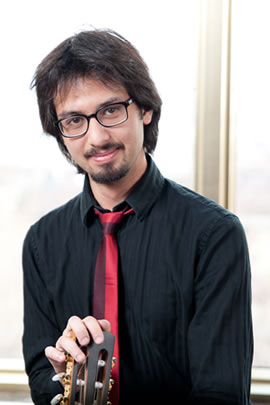 Born in 1988 in Montreal, Quebec, Adam Shugar balances a diverse career as a pianist, composer, and arranger. Raised in Ottawa, he completed his B. Mus in classical piano at the University of Montreal where he studied with professor Daniel Moran. Adam’s versatility in different styles of music including classical, jazz, and rock, has enabled him to constantly delve into many projects. He is also an accomplished guitarist who has played with many groups in the Montreal region, including his own Bolero Trio, who, in October 2012, were invited to play in São Paulo, Brazil at the ten day Red Bull Sounderground festival. He has served as music director/conductor for musicals in Montreal, Ottawa, and Winnipeg (Pippin, Bat Boy: The Musical, My Fair Lady), and most recently for MusiMétroMontréal’s Station Campus 3 spectacle in April 2013 at Café Campus with members of the Quebec group Les Colocs.

Hanukkah Overture is his first composition for clarinet and string orchestra.

————–
Hanukkah Overture was inspired by memories of my first Hanukkah with my grandmother and family. Composing the overture was an extraordinary and nostalgic experience. The piece is in four sections, and takes the listener through four moments during the Festival of Lights.

‘Lighting the Menorah’ is the first part, symbolizing the shimmering light from the candles and the warm glow of the menorah. ‘Ma’oz Tzur’ (Rock of Ages) is traditionally sung after lighting the candles. While the hymn has used many different melodies over the past seven or eight hundred years, I adapted a melody that first appeared as early as 1450. ‘Gelt and Gift Giving’ follows, where gifts are joyfully exchanged between relatives and children traditionally receive delicious chocolate in the shape of coins. Lastly, it is time to play with ‘The Dreidel’, the popular game that involves a spinning top and a collection of game pieces in the center of the table. The music reflects the twirling of the Dreidel and the fast-paced nature of the game